An Interview with Stephan Kühn

We interviewed Stephan Kühn, transport policy speaker of Alliance 90/The Greens, about the tasks politicians (and society) need to take on to ensure a successful mobility revolution. 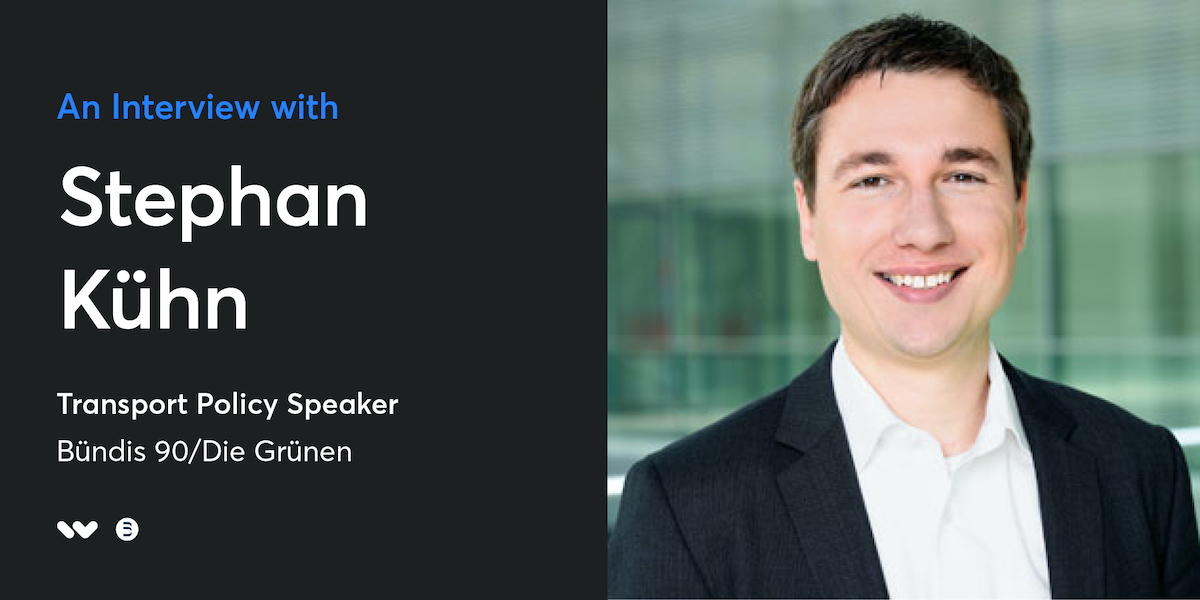 Even though public transport is considered a public service in Germany, infrastructure is not very highly developed in some parts of the country. What has to change, politically speaking?

There’s actually quite the debate raging on that topic at the moment: on the one hand, public transport is seen as public service, and on the other hand, it’s seen as a responsibility that communities have to manage. That’s why us politicians - exactly like health experts - have to think about how to define basic standards and public services.

The German state of Rhineland-Palatinate wants to convert public transport into a task for public authorities to manage, which I think is a good idea. Of course, we also have to make sure that a Herculean task such as this one can be properly financed. That’s why the Greens are calling for a third joint task (financed by the States and the Alliance) to incorporate this into regional public services.

How can we support local authorities in implementing public transport as a mandatory task, even without funding?

In this case, the transfer of knowledge and financing are both very important. There are lots of good projects, often launched as test or model projects, on how we can offer new mobility services in the area - for example, by linking passenger and freight transport, as has been done for many years with the KombiBus in the Uckermark region. But when you look at the administration that is ultimately responsible for licensing issues and for the organization of local public transport, you’ll notice the problems and poor staffing levels in the area. This is exactly where knowledge transferring is needed. We should create mobility agencies and advisory units - who give the often poorly equipped local authorities and their staff tools and support - at a state level and below, so that tested projects can be applied in other regions and we don’t have to reinvent the wheel every time.

One innovation in the transport sector is the upcoming amendment to the Passenger Transport Act, which many see as a great opportunity for mobility. Do you agree with that, or what other steps should politicians take to bring about a successful “mobility revolution”?

So basically, in addition to changes in the law and the question, “how do we finance the service?”, transport companies and municipal providers need to change their mentality. The industry has to see itself as an overall system, rather than constantly pushing the limits of its own tariff area. Experiments that may have worked effectively at one point cannot be repeated in exactly the same way. But if there’s no follow-up regulation after four years of regulation by way of the experiment clause, a project is often not continued. That’s why there has to be a framework as to how this can be better solved.

The amendment to the Passenger Transport Act currently also requires mobility providers to make (real-time) data available to municipalities and third parties (which is in line with the Finnish model). Can this also bring added value to Germany?

At the European level, we have the PSI Directive for this purpose, which is about making data available free of charge. But it still has to be implemented nationally. There’s a lot of resistance here in Germany, but many people have probably not yet understood that an open data mentality gives them a headstart and a chance to retain and win new customers. With “Whim”, Helsinki achieved exactly what it needs. The car offers a mobility ‘promise’ - get in, drive from door to door - which ultimately has to be transferred to public transport. But that only works if different offers are intelligently linked and reliable route chains are created. With digitalization and automation, we have a huge opportunity to create data-driven alternatives to messy fares and confusing timetables.

The federal government has announced an autonomous driving law. Can we help shape the technical development of AVs in Germany, or is that something that will inevitably be led by China and the US?

If you look at the distribution of patents in the field of autonomous driving, Europe and Germany are actually quite well positioned. In my view, however, the decisive factor is that we’re not discussing the technology at the moment - just transport policy. The problem is that the whole thing only works if the specifications are agreed upon at a European level and within the UN. What safety requirements do these vehicles need, and what do they need to achieve? That’s the question we should be asking currently. We’re not solving this issue at a national level, instead we’re looking to the EU, the UNECE and other bodies to create framework conditions. We need international agreement on safety standards and the legal framework that will make it possible - one simply can’t be achieved without the other.

What would your ideal mobility concept look like, and what would be your first steps towards achieving it?

There’s always a need for integrated urban and transport planning. That should be a prerequisite, but unfortunately, that’s often not the reality. We also have to make sure that new mobility’s promise to help us “get in and drive off” is implemented without having to worry about whether the connection works, how we should be paying or whether I can get from door to door comfortably. All means of transport should be intelligently linked, and travelers should only have to go through the booking process once. We have the flexibility of spontaneously and easily combining and using different means of transport, without having to have a car parked in front of our house for 23 hours a day - that’s great!