An Interview with Quinten Selhorst, CEO of felyx

We recently traveled to Amsterdam to interview the CEO of felyx, Quinten Selhorst. When we showed up in the Dutch capital on a typically gray and drizzly morning, the first thing we noticed was how few cars are driving around downtown. In this city, two-wheeled vehicles rule the road. 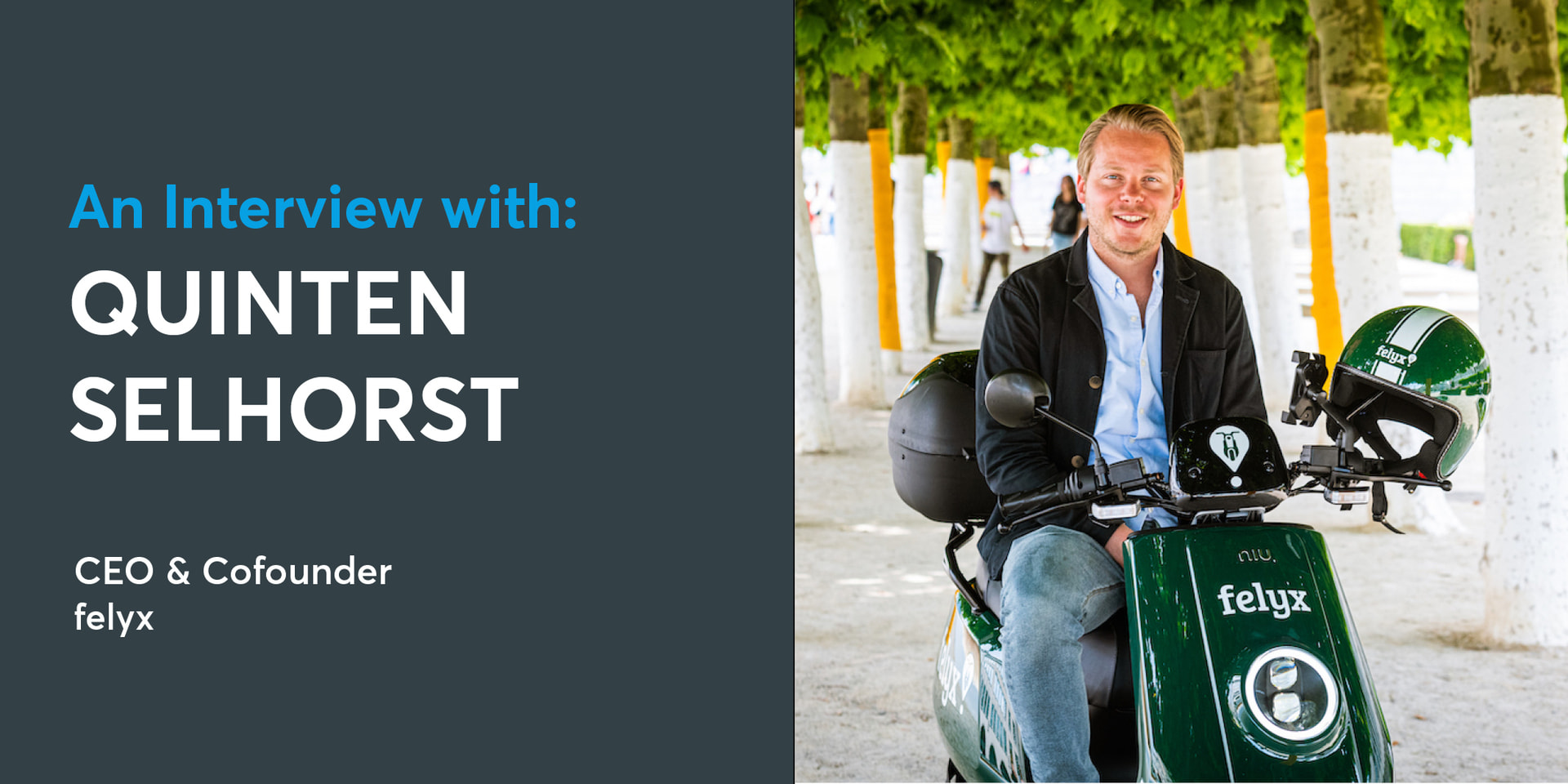 Hi Quinten, thanks for having me. Let’s start with the basics: What inspired felyx?

The idea of felyx was initiated late December 2015. The other co-founder, Maarten, and I were working as consultants at the time. In our private and professional lives, we were using car sharing services a lot - not just in Amsterdam, but in our travels, too. When we used car sharing in Holland, we kept asking ourselves the same question: why aren’t there any electric scooter sharing systems around yet?

If you look at vehicle specifics, electric scooters are a very efficient way of travelling around large towns. It’s a great way to travel with two people, it’s fast and it can easily maneuver through traffic and small side streets.

We were hooked on the idea of starting our own e-scooter sharing company. We took several months to work out a business case while we were still working at our consulting jobs. Then around April 2016, we decided to quit our jobs and work full-time on bringing the idea to market - or, if the idea was too implausible, not pursue it any further. But we actually did it! One year later, we got our first 108 electric mopeds on the road here in Amsterdam. They’re still riding around the streets today.

So when you guys started out, there were no other competitors doing what you did?

Actually, around May 2016, we read about the first pilot in Europe, which I believe only had around 30 scooters. We realized then that we aren’t the only people out there with this idea. At the same time, however, it meant that there was proof of concept and that our concept was technically feasible. That was very important for the investors at that time, too. No one was sure if scooter sharing was really going to work.

How times have changed. With so many fish in the shared mobility sea, what makes felyx different from other e-moped sharing services across Europe?

At felyx, we’re very keen on and capable of optimizing collaborations with different municipalities and local governments. That’s one of the reasons why we were granted vital permits and why we got the green light in some international cities. Municipalities are actually in favor of working with us, which gives us a competitive advantage.

Secondly: it really all boils down to having the best unit economics. If we compare ourselves to others, it’s our quickness and the amount of scale - that is to say, how often each of our scooters is being used - and our business intelligence that really sets us apart. I think we’re doing an excellent job of distinguishing ourselves amongst competitors. 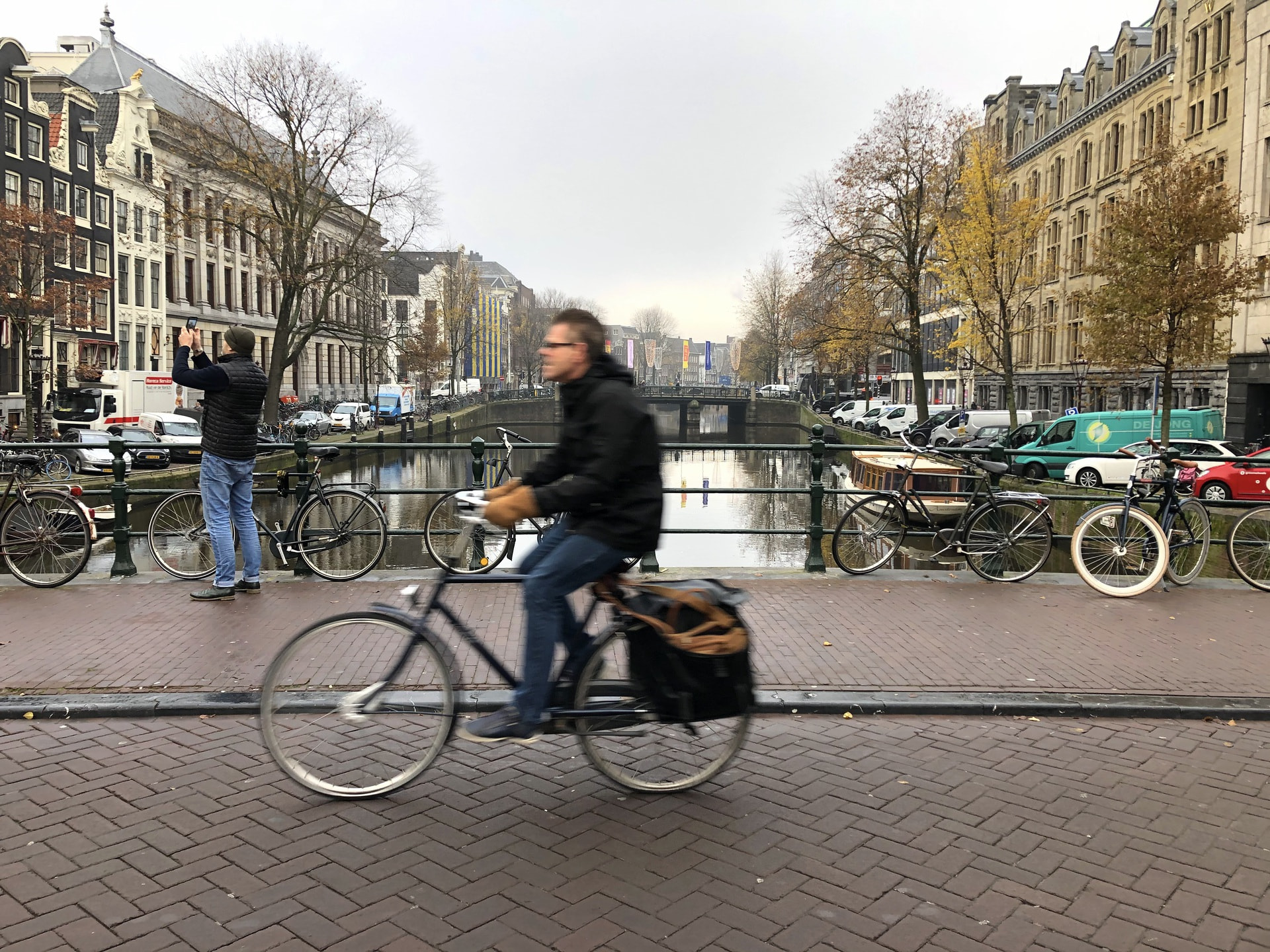 Out of all of Wunder Mobility’s clients, felyx has seen the highest growth in terms of rides taken on our platform! What’s your secret?

From the beginning, we had a vision about how to build a company. The felyx team has always been very good at conducting the right type of analysis to predict which marketing mechanisms are the most effective, partially thanks to many of us having backgrounds in consulting. In terms of the rather limited market in the Netherlands, we’ve been able to prove that we can do a tremendous job of that. Within only a few weeks’ time, we can create a new system that sees the same amount of rides per scooter per day as existing markets that have been in operation for over a year.

Doing the right analysis and thereby being able to predict market developments with a particular amount of certainty allowed us to get a lot of new riders onto our scooters. That’s definitely one of the key drivers of our success.

What about the future - do you have any big plans coming up?

In 2019, we tripled the size of our fleet. We doubled the amount of cities we’re active in and entered our first international city. The team also grew quite significantly, and we know we’re set to continue to grow next year as well. You can definitely expect big things from us in 2020. Of course, on the one hand, we’d really like to focus on retaining our competitive edge in the Dutch market, but from a growth perspective, we know we need to launch international cities as well - stay tuned to see what happens in the months to come!

E-kickscooters are generating both positive and negative press right now. Do you understand the hype, or do you think e-mopeds can succeed where kickscooters might fail?

That question can really be broken down into two separate things. In terms of felyx’s vision for the future, we believe it’s necessary to change the way we use mobility. As a society, we need to stop wanting to own vehicles ourselves - cars, bikes and e-scooters - and start working with sharing systems, transitioning away from private ownership.

In terms of e-kickscooters vs. e-mopeds, I think that both vehicle types can live together in harmony. They fulfill a very different kind of demand for customers. What I see as being problematic currently, however, is that it’s very difficult to pinpoint who the last rider of a vehicle was. Kickscooters are very lightweight and not locked to anything, making it very hard for operators to know if the customer is responsible for any wrongdoing (like bad parking or damages) or if it’s the fault of somebody else - that contributes to the bad reputation kickscooters have.

With mopeds, however, it’s actually more comparable to car sharing. When you see a moped parked somewhere, there’s a high degree of certainty that the last customer who rode the moped parked it there. Let’s be honest, it’s pretty hard for the average person to lift a 100-kilogram scooter on their own! Due to that fact, we’ve found that the parking behavior of our customers is actually better than people who park their own personal, gasoline scooters. 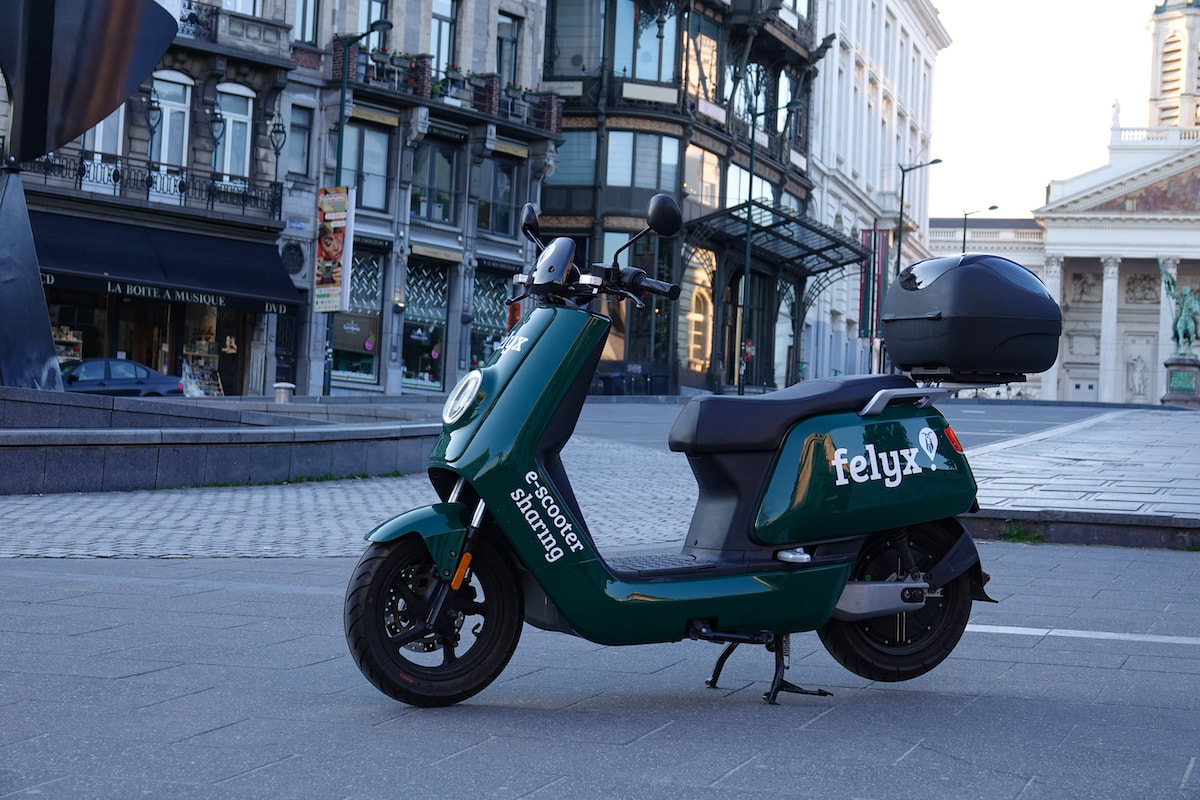 There’s also the fact that drivers licenses have to be verified - there’s a lot more responsibility (and pressure!) that goes along with that.

Exactly. There’s also the sustainability question. I’m very much in favor of electrifying as much as possible, don’t get me wrong. But we have a responsibility as operators to think about the lifetime of our vehicles. I do understand that kickscooters are being improved upon every generation, but I still believe the lifetime needs to span around 4 to 6 years to actually have a sustainable impact.

Of course, safety is an issue as well. Moped drivers are higher off the ground and have to wear helmets, the latter of which scooter riders don’t have to do (but probably should).

Let’s talk about felyx and Wunder. What made felyx decide to choose Wunder Mobility as your software provider?

There are two reasons. The first one was that we saw that the Wunder Fleet system is very, very robust. Especially during our launch, it was important for us to have low downtime and to know exactly where our scooters are located, all the time.

The second reason is the flexibility. We have a lot of requests that can easily be incorporated into the platform by Wunder Fleet. This close collaboration is also a major part of why our scooter sharing system was so successful, and that’s why we chose Wunder Fleet to be our software provider. It’s very nice to be able to trust the high-value partnership we have with Wunder.

Are there any moments you’ve lived during your journey with felyx that you’re particularly proud of?

Wow, there are so many things to mention! To be honest, we didn’t know that we had experienced the highest rate of growth in terms of rides taken on your platform - that’s definitely something to be very proud of!

We’re also happy to have grown our team incredibly quickly. We created a highly efficient, highly scalable company with a great culture. Sometimes, when companies grow fast, it’s hard to preserve a positive and friendly culture, but that’s something we’ve managed to retain since our start.

And finally: in only just over two years time, we were able to put more than 1200 electric scooters on the road and stopped a huge amount of CO2 from being emitted in the process. That’s ultimately what we’re here to do: we want to improve the quality of life in cities. We’re an active part of the change. Being able to see the impact we’ve made on city life in the past two years is something I’m truly proud of.

About a month after launching felyx in Amsterdam, we got a series of photos sent to us from one of our customers. She was actually moving into a different flat using one of our scooters as her only means of transportation! The photos she sent us were hilarious - the amount of boxes and bags she could fit onto one scooter was seriously impressive!

We have our war stories, too. During the first pilot of felyx, Maarten and I deliberately chose to swap out the batteries of our fleet ourselves. That allowed us to fully understand the logistics of the battery swapping process and optimize it in the future. Since we were swapping batteries at night and running the business during the day, we slept maybe three hours a night for eight weeks straight. It was intense, but it also taught us some important lessons that we still implement today!

Thanks for having me, Quinten. We can’t wait to hear more from felyx in 2020.